Exercises can often be a bit of a chore; we play them to improve our technique, ad naseum. When I was younger, I used to dread opening my Arban's (a popular trumpet method), and to some degree I still do.

Not all exercises have an accompanying etudes, and etudes only give one example of the exercise in action; so I started giving myself tasks and challenges for dealing with the rigmarole of inane exercises. Here are 3 of my favourite strategies to revitalise exercises.

Here's my example exercise. I won't cover the basics such as changing key, retrograde, or inversions, but they are all very useful skills to learn as well.

This is something I regularly visit, even with simple major scales. This exercise, performed with a metronome, can be really tricky, as we're used to the articulation pattern in the original exercise. In the first system, I am accenting every second note on the beat. In the second system, you can see I am accenting the 'off-beats'. In the third, I am accenting every third note. You can also split the accents, as in system four, where I have accented 3 then 2, and repeated it. There are two parameters we can change to manipulate the original exercise: the interval (i.e: 2nds, 3rds, 4ths, etc., we can also make them diatonic [of the scale] or major, minor, add chromaticism, etc.), and the direction of the interval (up, down, two up one down, etc.). This is a great way to build range and flexibility for brass and woodwind instruments. 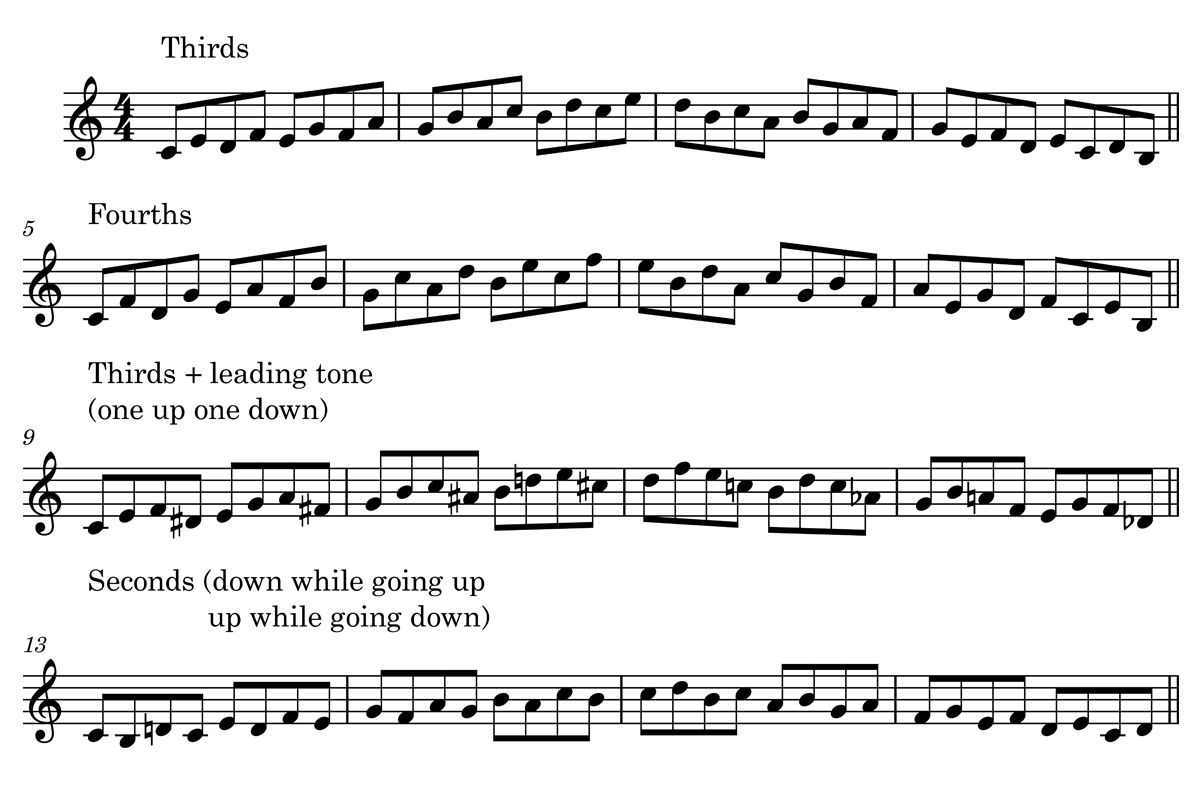 Changing the rhythm may be the easiest change to make initially, but it can get complex once you add in odd-meters and tuplets. In system one, I have changed the core rhythm. In system two, I have changed the meter and put the exercise in triplets, add the extra 7th at the end of the exercise to give it flow. The third system is quintuplets grouped in ascending and descending 5 note passages of the scale. More advanced players can try to group these quintuplets in groups of 4 or 3 notes of the scale, as shown in the fourth system. As a fourth idea (a bonus!) you can combine these to form your own etudes tailored to your own level. Keep in mind, it's best to use the articulations, intervals, and rhythmic/metric values you have worked on to create these etudes. You can apply any one, two, or more of these concepts to revitalise and provide context to the exercises you are working on. In the meantime, here's an Intermediate C Major Etude for you. Try it out for yourself and remember to check out the rest of our Blog posts for practice inspiration and motivation.